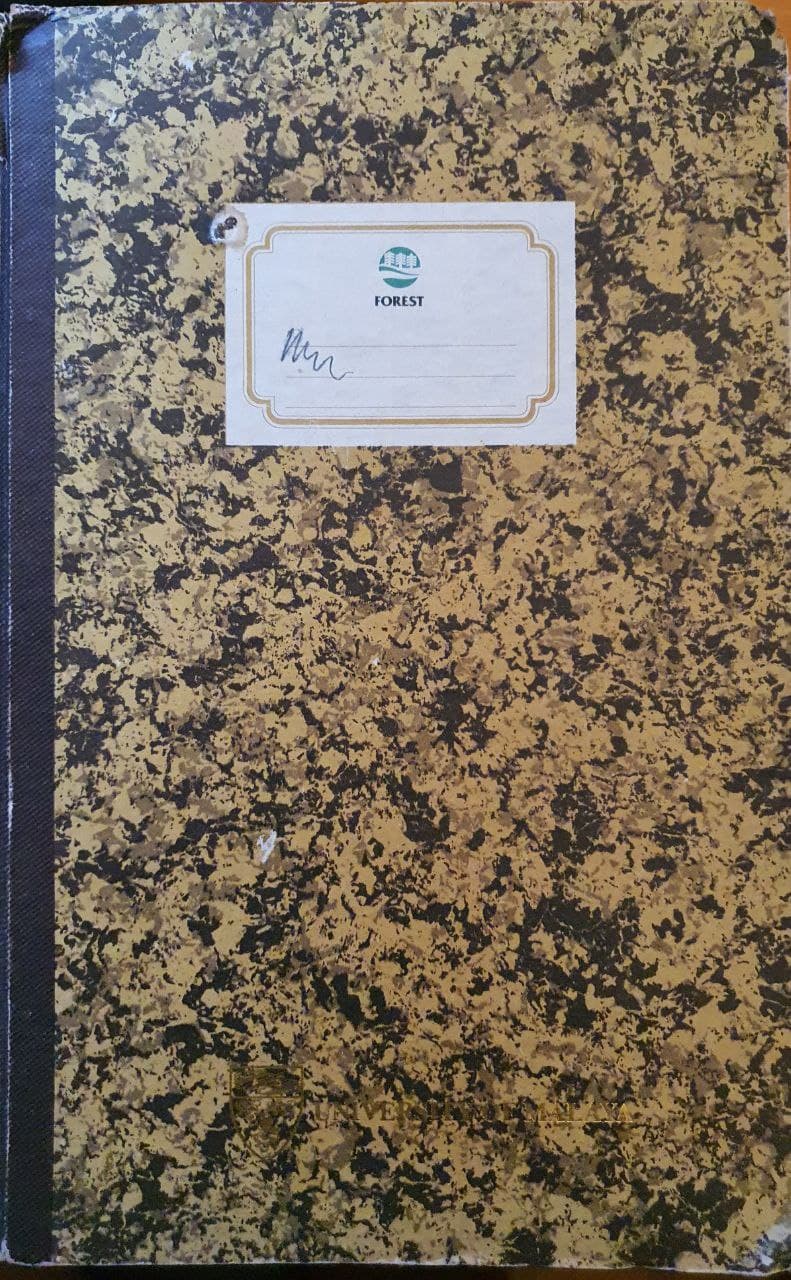 Recently, I was clearing stuff out of my study. I chanced upon my youthful attempts at collecting news reports which were of interest to me, and in the hope that I, on the off chance, was reported in the media. Those attempts are contained in an A4-sized lined journal with an autumn floor-like pattern. I would cut out newspaper reports and stick ’em in. About a third of the book was used up and it covered the period between 1998 to about 2002. It was a half-assed attempt to build my secret historical stash. I was not consistent.

I share here a selection of those news reports and articles I collected led by my first reported media appearance and letter to the editor. 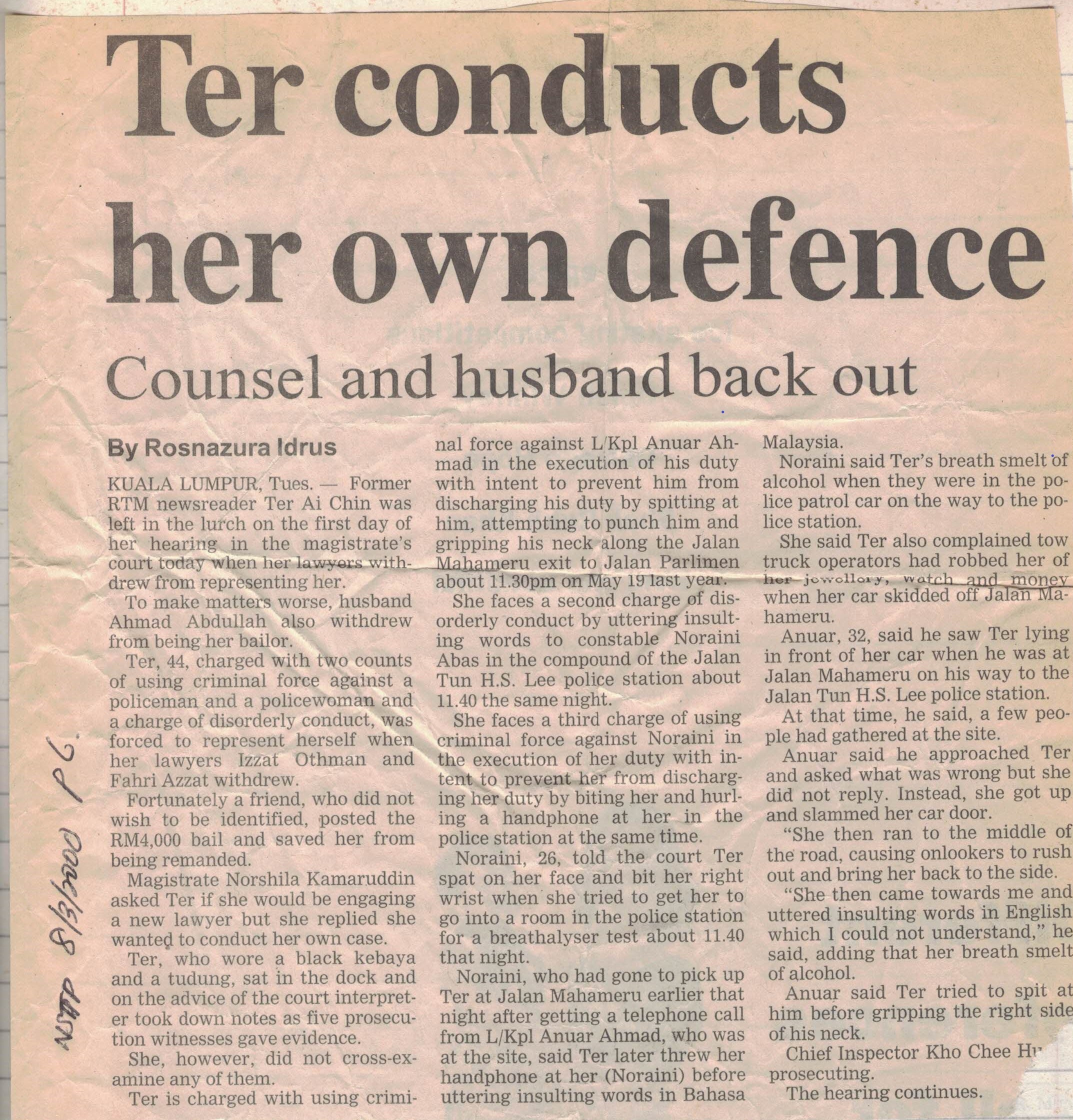 I know my then boss, Izzat, and I look pretty bad in this news report. I was then in my seventh month of practice as a lawyer having been called in August 1999. I thought it was just my luck that before I had even finished my first year of practice I looked bad in the media! The report bothered me for a while because I thought it would reflect poorly on me. Thankfully, people forget, including me. I would have forgotten about this episode were it not for chancing upon my scrapbook.

I still remember that morning and the former client. Ter Ai Chin, a minor celebrity still then. She was someone who did as she pleased, damn the consequences. I found that liberating as a personal philosophy but disagreeable for a client we had to provide legal counsel for.

If it was not the night before then very early that morning she instructed us that she would not be attending the trial. She instructed us to get an adjournment. Doing that was a dicey thing by that point.

The Magistrate in fixing the trial dates that morning had warned us from any further adjournment applications; he would not entertain them. That was fair. Previously, the trial was adjourned several times before on her application. My boss, Izzat, was angry because of the last-minute notice and at having to request another adjournment, especially after the ‘these are final dates’ had been declared over them. It was not the first time we were in this difficult position for her case.

When the case was called up that morning, the prosecution confirmed they were ready to proceed. The Magistrate asked where our client was. My boss got to his feet and explained that she was not present because she was sick and requested an adjournment. I was waiting for the blowback. To our surprise, the Magistrate raised an eyebrow at my boss.

“You said your client is sick?”

“Either you are lying to me, counsel, or you don’t know that your client is downstairs. “

“I am not aware of this, Tuan. My instructions are that she is sick and we were to request an adjournment. She instructed me herself. May I please have a short stand down to confirm this?”

The Magistrate allowed it. Izzat was pissed. Major pissed. Until that point, I had not seen him angry. We headed downstairs and looked around for her. Her husband followed behind. He was the one who hired us for Ter. We spotted her with someone and went to her. If there was one thing I learned handling her case was Ter Ai Chin always turned up dressed to the nines, hair nicely styled and her face made up. You could fault her with everything else, but you could not fault her for her dressing up.

“What are you doing here, Ter? You told me you were sick and couldn’t come,” Izzat asked, his anger barely contained.

“I decided to come. So is it going on?” she said haughtily. I saw our bowl fish reflection in her shades.

“Why didn’t you tell me then? I told the judge you were sick and couldn’t come. You made me look like a liar before the Magistrate, Ter.”

She turned away and talked to the person who was with her.

Izzat turned to her husband and told him we were going to discharge ourselves. We went straight back up to the court and had the case called up. Izzat told the Magistrate we did not know she turned up, apologised profusely to the Magistrate and discharged ourselves from acting for her.

These days I laugh when I read a judge spout stuff like that. Do they really believe it or has it become some kind of incantation they recite before they dive into their cognitive biases and pass a sentence? The judge ‘said a deterrent sentence was also necessary to deter other potential corrupt civil servants...’

Has there been any domestic empirical research to support that assertion? If there isn’t then using that as a basis for imposing a heavy sentence is speculative and without basis. And let’s get real lah – people don’t know or care about criminal cases or law until they are involved, so masses will not know about these deterrent sentences and how they are supposed to deter others from crime; these sentences passed to supposedly deter others are just an excuse to sentence heavily.

After all, since the news report above, has corruption gone up or down?

I remember we were all very pleased at the appointment. I think Rais Yatim likened the appointment to the rejuvenation of the judiciary. We looked forward to it and then, as usual, were disappointed by it. At least defamation mega-damages ended during his tenure.