Elected for the Bar Council Elections 2022/23 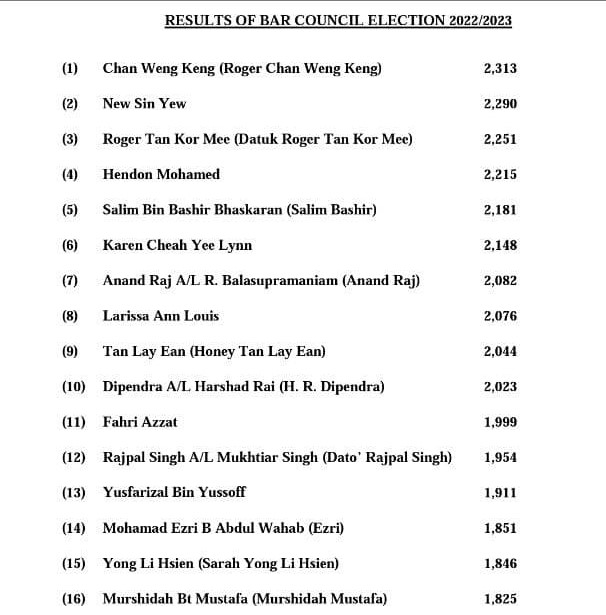 Last month, I wrote about standing for the Bar Council Elections 2022/23 for the first time.

Yesterday, I learned I was one of the elected sixteen. I came in eleventh with 1,999 votes.

I am grateful for being given this opportunity by my learned friends to serve the Bar Council in the coming year.

I am grateful to my learned friends who took trouble and time out of their routines to not just vote for me but also encouraged others to give me that opportunity.

And in so doing, they allowed me to stand for the elections the way I desired; in the manner of yesteryears, without trumpet, fanfare, and pictures, which is how I prefer to go about my work. I have no issue with how others wish to go about their work. I am simply grateful to be able to do it the way I wanted to.

I would like to take this opportunity to point out how vital their support was and will be to me in maintaining my integrity and hope. I am immensely grateful to them for that.

My integrity in that I could not bring myself to promote myself for election. There are a few things I loathe more than having to promote myself. And doing so would make me loathe myself for it and dread what I have to do. I’ll promote anything else, someone, a cause, an argument, some financial whatsit, a new-fangled rice cooker, some exotic animal, just give it to me. I’ll promote it, I’ll sell it. Just not me. It’s like a lawyer doing his own case, ish.

Knowing I have 1,999 members rooting for me without even being asked to (okay, okay, I asked my father and both my lawyers, so that’s 1995) has me motivated to bring the best version of myself in performing my duties in the time to come.

My sense of it is that though teams are useful in certain situations, where the Bar Council is concerned, we don’t need teams, we need a community. Even if we do have to take a side in an argument, the sides to it should fall away once the argument is done and allow us to stand together or with each other. There should be no permanency in any of the lines drawn between us as lawyers serving on the Bar Council.

Ironically, a community can only come when each of us has the confidence to stand and serve individually. And when chosen, to genuinely serve those communal interests without hoping to satisfy any personal or group interests, whatever shape or form it may take. In short, a real community happens when each of us acts bona fides for the greater good of the Bar. That, I feel is the orientation to take, in performing our duties. The more of us do so, the likelier it is to happen.

In that respect, my hope is that others are encouraged to stand independently in the future. I am not against teaming up with each other. That’s just one way to go about it. I am for a plurality of ways of doing things. I have stood on my own to make that point. I’d like to think my election suggests there is space and opportunity for those that wish to stand on their own. We have to be the change we wish to see.

S. Balarajah in his delightful posthumous book Lest We Forget published by his estate, which I commend, contains a citation he prepared for the naming ceremony of the Johor Bar Auditorium on 15 June 2015. They were naming it the Abdullah A. Rahman Auditorium. He was the Johore Bar’s longest-serving Chairman (1970-81) and the first Johor Bar Chairman elected as the President of the Malaysian Bar (1978-81). S Balarajah describes him as having carried himself in the tradition of the quintessential English gentleman with strict ethical principles. I love his description of the man.

This was what was said of Abdullah A. Rahman, amongst many others:

He was bold upright and fearless and had priceless integrity and sturdy independence.

Page 84, Lest We Forget, S. Balarajah

I also like the final line of his citation:

This is my tribute of admiration and affection for Che Lah [as he was called] who urged me to follow the wise and profound words of Francis Bacon (1561 – 1626) who said: “I hold every man a debtor to his profession; from the which as men, of course, do seek to receive countenance and profit, so ought they of duty to endeavour themselves by way of amends to be a help and ornament thereto.”

Page 85, Lest We Forget, S. Balarajah

Abdullah A. Rahman was my father’s maternal uncle. That makes him my grand uncle. He influenced and encouraged my father to take up law. I wrote earlier about how I arrived at the gates of law.

In pointing this out, I do not mean to suggest that I am anywhere within eyesight of Abdullah A. Rahman. Rather. I am not even a faint shadow to him. I cite him to show there is precedent to such qualities in my family that I am mindful of and whose tradition I feel duty-bound to follow aside from my own professional ethical demands.

I am aware that my election is not the culmination of my duty as a member of the Bar Council, it is my starting point. I am aware of the disappointment, distrust, and disinterest many members have with the Bar Council and how heavy that makes my duty, and how carefully I should go about proposing solutions. I am aware there is much we, each and every one of us, have to do to ensure our august house is in order. I am aware that I was voted for in the hope that I can do something to improve our lot.

I am aware of all that. I will not shy away from any of the things that my duties command me to deal with. However, I know that my work and the solutions I have in mind will need the Bar’s commitment, support, and above all, trust to see the light of day. It will need the support and approval of as many members of the Bar as possible. Because the betterment of the bar is not simply the duty that falls on just the elected, but upon each and every one of us.

In that respect, and in relation to the second quote above, with tongue firmly in cheek (I have to say this because it’s Malaysia), I shall endeavour to bring home the Bacon.