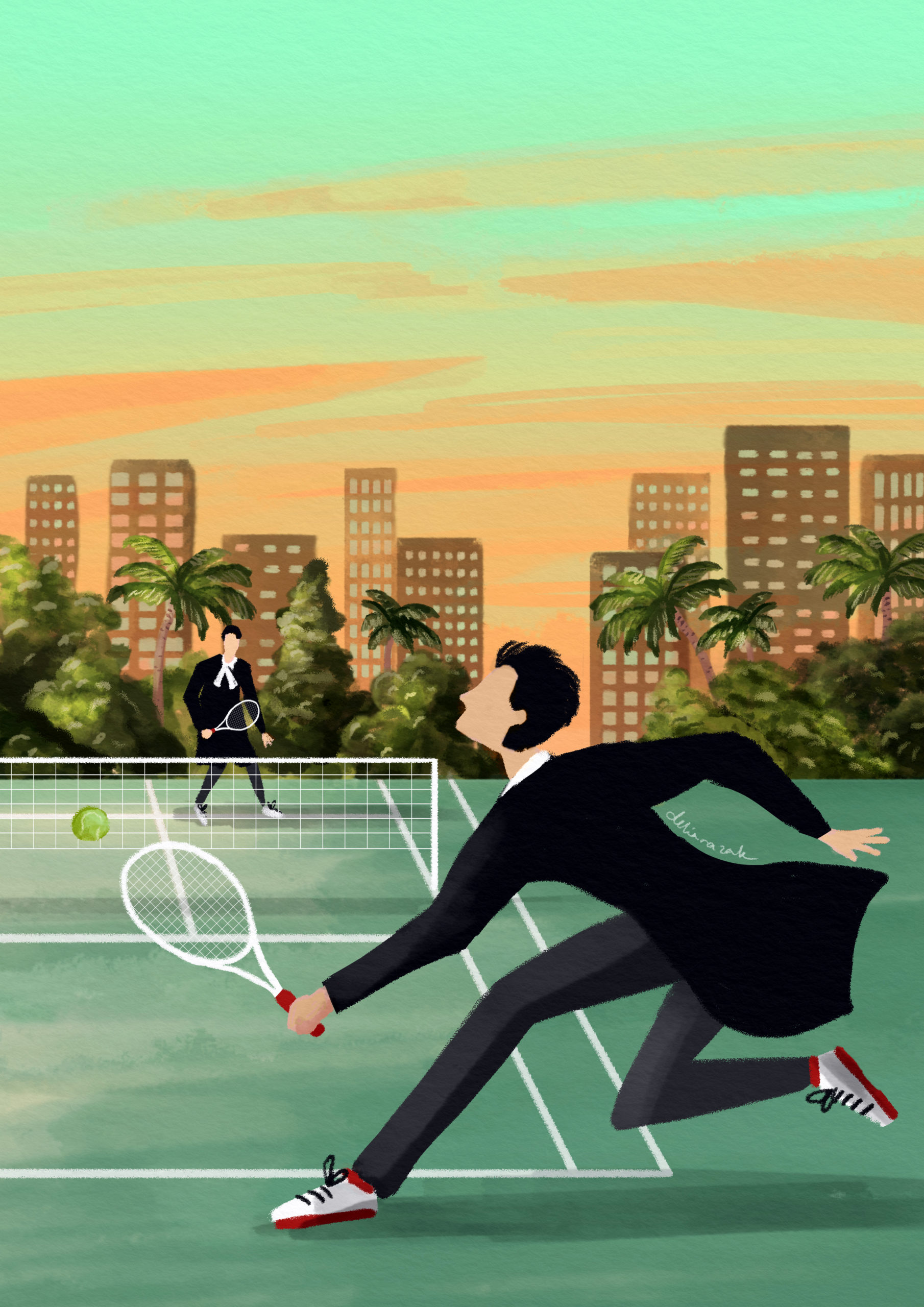 When I started practice, I fancied myself a decent tennis player. When the opportunity to try out for the Kuala Lumpur Bar Committee tennis team appeared, I signed up.

I don’t remember where it was held but I do remember it was at a leafy, cozy and quiet set of courts in the evening after working hours. When I arrived there were two Malay men casually rallying with each other. I made my way to the bench and waited my turn. Although both of them had fine strokes, it was apparent one was superior to the other. You could tell from not just the efficiency of his strokes but from his gait and the economy of movement he was technically sound and very experienced. Let’s call him Good Player.

A fine tennis rally is a thing of beauty to behold. And so I beheld until the other player came off after about fifteen minutes. He held up his racket and beckoned me to take over. I got on court and warmed up with Good Player.

After the first few shots it was apparent he had complete control of the ball. Each shot came at me at the right place, right height with just the right pace so I could warm up comfortably. He slowly increased his pace and widened his placement of his shots as the minutes rolled by. He pulled me further away from the centre of court or pushed me further behind the baseline with unhurried measured strokes as I huffed and puffed to get to the ball.

He rarely missed a shot or dumped it into the net. In those respects, I was by far the superior player.

Even though he didn’t seem to break sweat after what felt like forever (it was about 15 minutes), I was a perspiring, heaving and panting mess ready for the bench. I glanced at the bench and saw a new face next to the other player. I waved to both of them to take over and thanked Good Player as I limped over to the bench. New Face got up and stepped into court. The Other Player remained seated. I dumped myself next to him. We made our quick introductions after which I swallowed air by the mouthfuls.

“Wah. Not bad your game. I see you have been coached.”

“Oklah. Your game also looks good. How come you didn’t want to hit again?” I replied.

“Nah. Let’s wait for New Face to warm up then we can do doubles,” he said as he lit a cigarette behind a cupped hand. “I need to catch my breath.” After a flash in his palm, he pulled away with a lit cigarette in his mouth. “You and me, we are both about the same level. Nice strokes for fifteen minutes then koyak.”

“Yah. Yah. My stamina is so off. Its worse when I hit with someone like Good Player. He doesn’t miss a shot. Insane.”

We both watched Good Player and New Face rally. New Face was good, probably better than me and, Other Player. But he was still no match for Good Player who seemed to move in slow motion and yet is precisely where he needs to be to hit his shot optimally. His tennis strokes were beautiful. I could watch him play all day and not get bored.

“Man. This Good Player is too good lah. What is he? National or former professional or what? If the others are anything like him, I don’t think I have a chance, man!”

“Eh, no lah. Chill. Chill. Just wait and see who else turns up. We need many players so don’t be too hasty. So far only four of us have turned up for the tryouts. And I am organising. There should be more. Anyway, just so you know, Good Player was a former state player. I’m not sure for Kedah or Perak. I don’t know whether he made it to the national team.”

“Oh yeah. We are the same batch. We did dock brief together.”

A dock is where an accused sits in court. A dock brief in older times was the practice of hiring a lawyer, who hung around court, from ‘the dock’. Brief here means to instruct. Hence the phrase, ‘dock brief’ – instructing from the dock. In Kuala Lumpur and Selangor, there is a program for pupils to take up such dock briefs. They act for accused who want to plead guilty in the Magistrates courts and cannot afford a lawyer. Their services are free.

“I see. Good Player is still so sharp! I love watching him hit. He is so graceful. How wonderful to play at that level and be a lawyer. I don’t think I could ever get to his level.”

He smiled to himself, drew on his cigarette then blew out the smoke through his nose.

“Don’t worry about things like that and focus on your practice. You will never beat him at tennis.”

“That’s writing me off fast. I haven’t gotten serious yet.”

“Don’t get me wrong. I’m not saying you won’t get there if you worked at it. You just won’t have the time if you are practicing properly. What you don’t know is that that is his job.”

“Yes. And golf, squash, basketball, badminton, and any sport you are likely to play. He will kick your ass in all of them. He can also talk about sports and knows all kinds of sports stats. He knows the teams, the scores, the tournaments, the tables. And if you want a spot in an exclusive restaurant with a long waiting list, he can get you in. He can sembang with you all day. That’s his kind of practice.”

“Wow, that sounds awesome. When does he have time to go to court, read the law and work on cases?”

“He doesn’t. He may be qualified as a lawyer but he does not practice law like you and me. I’m a corporate lawyer by the way. He doesn’t get involved with cases or contracts. His focus is the client, making sure they are well informed, comfortable and taken care of.’

He winked at me with a cheeky smile.

“I didn’t know that was an option for legal practice.”

“It is. Let me tell you something you are going to learn as you get on in practice. There are lawyers and there are ‘lawyers’. Don’t be fooled by their legal qualification.”

“What a charmed life such ‘lawyers’ lead.”

“It is. But only when times are good. When times are bad, who do you think gets cut first? Those that can’t do the work. Stick to proper practice, my friend. Don’t be fooled by the easy lifestyle. If you want to get anywhere, you have to work hard and smart or get lucky, all three preferably. It’s not how you start that is important, it is how you end. And … what? Oh. Let’s continue this later. Come, they have asked us in. Time for some doubles. You want the forehand or backhand?”