Evolution of the Future Lawyer 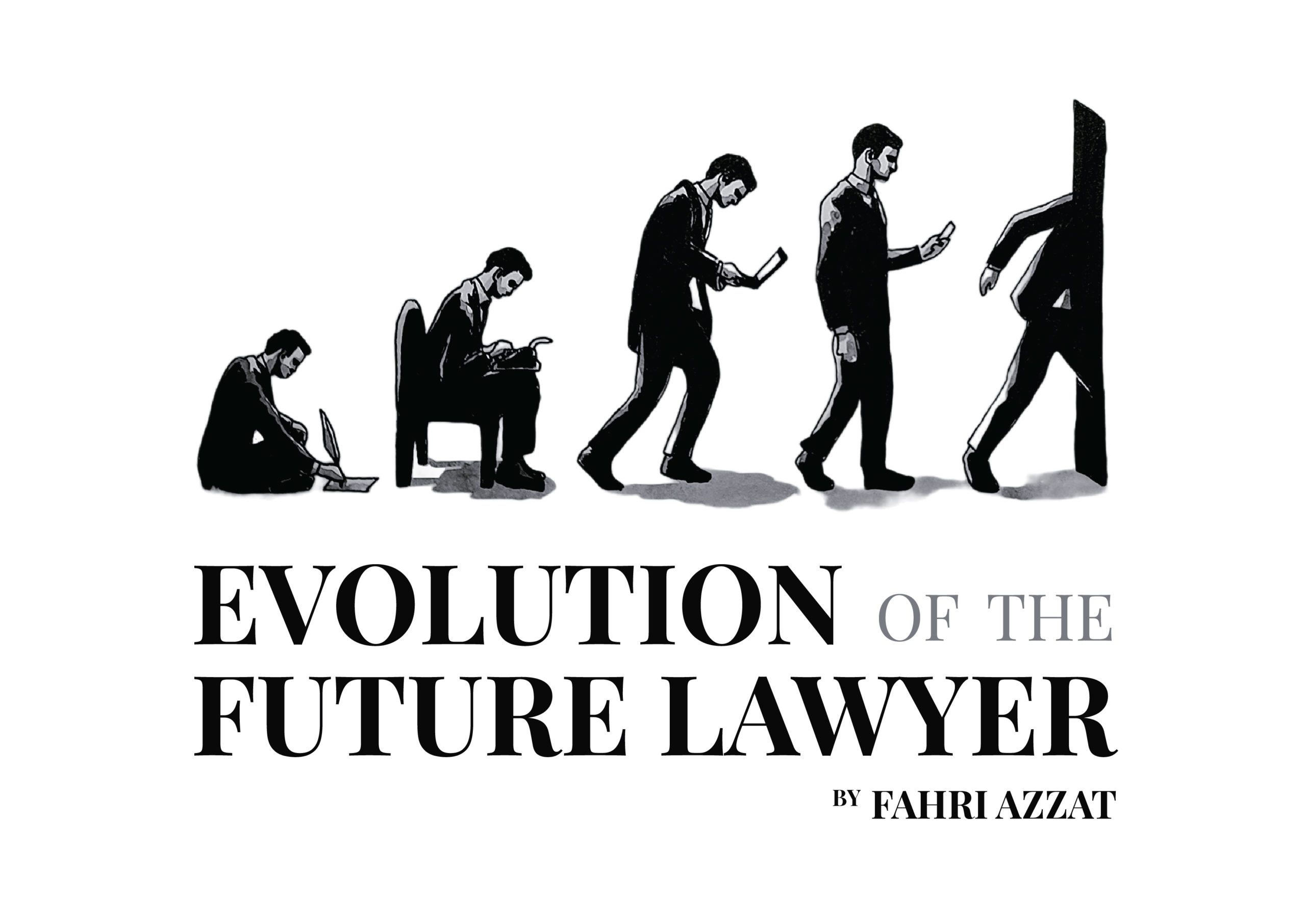 What the future lawyer (and with it legal practice and legal firms) will look like is something I like to read about and speculate every now and again. Regrettably, it is a topic that is not much addressed by Malaysian lawyers, particularly the young ones whose lives and careers will be most significantly affected by it. Of course, I will be affected by it but I am closer to the end of my legal career than I am to the beginning and so hope to contend less with what is to come.

What is clear to me about that future lawyer is he or she will be different from what came before and what we have now. The what and why of the work has not changed as quickly as the how but whatever it is likely to be considerably different from what we have today. This is obvious when I compare and contrast how the work was done during my father’s time and mine and contemplate mine.

If my father’s time was symbolized by items like the paper, pen, ink, typewriter, pink ribbons, cardboard files, physical legal journals, fax, cheques; mine was symbolized by the email, computer, laser printers, photocopiers, local networks, and servers, online legal journals, search engines. But my time is not done yet and continues to evolve so rapidly that legal practice is now dominated by instant messaging, cloud computing and servers, remote hearings, trials and case management, online filing, digital textbooks, and journals to start. That is to say, nothing of the artificial intelligence, machine learning, algorithms, even faster processing and communication speeds and robots that we will have to contend with that are on the horizon if not already quickly approaching us from the distant mountains.

What all these technologies are doing and going to continue doing is take over human work that is repetitive, formulaic, digitized, and automated or make them accessible to the public without the need of a professional or even human intermediary. Professor Richard Susskind has made this argument for a while now through his books such as The End of Lawyers? And Tomorrow’s Lawyers. However, much of his focus has been on corporate law and simple enforcement application proceedings in court such as enforcement of securities.

I used to think technology will find more difficulties landing on the rocky dangerous shores of litigation with the variety and diversity of human variables populating it, but I have changed my mind.

The reason for that is Zafran can code. And when I say he can code, I mean he has serious programming chops and possesses a sound understanding of the law and litigation. On top of that, he has the required imagination, creativity, and intelligence to craft programs that automate repetitive, formulaic, and digitized information to make his life easier. I don’t know any Malaysian lawyer that possesses this skillset to the extent Zafran does.

An example: He created a script that would compile the relevant cause papers to generate a completed paginated record of appeal with an aesthetically pleasing format with index and cover, in less than a minute, which complies with the Rules of Court 2012 and practice directions. All he had to do after that was print it out.

He can do that with any document in PDF and that needs to be bundled according to court requirements. He did that because he works solo, abhors manual labour and mistakes, prefers to input his information accurately once, and does not trust his human frailties; those drove him to create the automated bundling script. He has now made that service available to Malaysian lawyers at his website, Lex Technicae. Please check it out.

That service alone will significantly reduce the need for “manual work” in the firm, which is often the province of staff, interns, or pupils. That service is also quicker, cheaper, and more accurate than human hands and eyes. The pace of litigation would, again, speed up. It is good for the lawyers but also good for the client. Those that cannot adapt and insist on doing it the old way will end up extinct simply because they will not be cost-effective compared to everyone else.

This is a small example but an important one because it points to the future of litigation, legal practice, law and should force us to seriously consider what role we as lawyers are going to play when all these technologies come crashing through our profession’s door.

From now on, it will not be enough to just know the law and its application; we have to also know, familiarise and be comfortable with the technicalities of technology. That is already happening in the litigation side of things where we now have to be familiar with the different available video technologies such as Zoom, Microsoft Teams, Skype, etc. We need to know how to work this in order to attend court.

Lawyers like Zafran will thrive and flourish because their skills and knowledge will enable them to craft technologies to give them an edge over the traditional lawyers, like me. They will be able to process information faster, turn around work quicker and present their cases optimally. They can come up with both legal and technical solutions. No matter how much faster, harder, and cleverer I work, I will not be able to compete over the long run because the technology already does all that for them; it is akin to racing a car against an airplane, I can keep up on the tarmac but once they hit the air, I am a speck on the ground.

Sometimes it feels like we have to do so much to simply stay in the same place or keep close to the general pace in this internet age, and I confess there are moments when it feels exhausting because of the relentlessness of it all. There never seems to be a moment’s pause and we are constantly having to adapt to new technologies or perish eventually. Whether I like it or not is irrelevant because evolution is the way of life and natural selection is its mechanism.

In a famous passage of the Origin of the Species, Darwin wrote the following, “It may metaphorically be said that the natural selection is daily and hourly scrutinising, throughout the world, the slightest variations; rejecting those that are bad, preserving and adding up all that is good; silently and insensibly working, whenever and wherever opportunity offers.” [Emphasized by Darwin]

To me, natural selection demands that lawyers need to achieve a minimum technical competency to be relevant in the future of legal practice; if we do not have it when the future arrives, we will not last long there. What that minimum technical competency is, I don’t know. What I do know is that if I hope to stay a little in that future I am going to do what my idea of the future lawyer was exhorting me to do three years (or was it four?) ago: I am going to open up that introductory Python programming book Zafran bought me and start recalibrating myself for the future.